I try to use the script in the follow link:

A repository of custom scripts that can be used with Sentinel-Hub services.

but nothing happend (I see all in black or white). 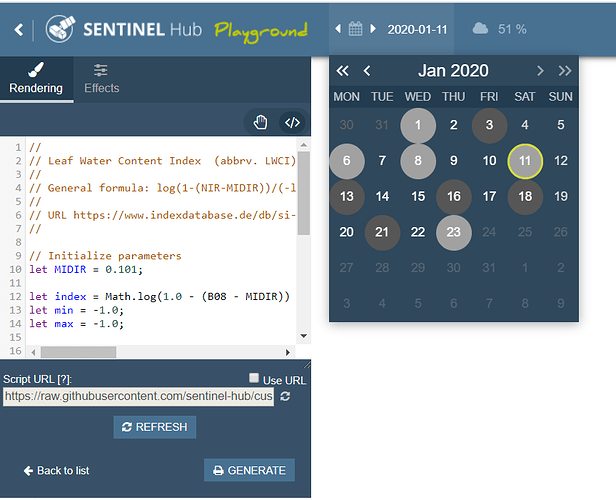 Thank you in advance.

There is a comment in the script which says:

// colorBlend will return a color when the index is between min and max and white when it is less than min.
// To see black when it is more than max, uncomment the last line of colorBlend.
// The min/max values were computed automatically and may be poorly specified, feel free to change them to tweak the displayed range.

For example setting min and max to -1.3 and 0.0 yields some results.

Based on the original articles about calculating LWCI, it seems that the equation is incorrect.
The equation from IndexDB is as follows:

The equation described in this article is:

As MIDIR means mid-infrared, it cannot be a mere number, as is in the current custom script, but should be a band. For sentinel-2, a mid-infrared band, corresponding to 1600 nm would be band 11.
Additionally, both logarithms should be negative, according to the article.

Also, if we look at the equation from the article, you see that (as opposed to the index DB equation) the second parameter in parenthesis of the denominator is different from the second parameter in parenthesis of the numerator; R_1.6_FT is reflectance at 1600nm at full turgor. Although I could not figure out how the full turgor was estimated, it could have something to do with research on the field:

One idea I had was to suppose the R_1.6_FT is the maximum value of band 11, but the results were not satisfactory.
The following statement leads me to believe, that the LWCI could be multitemporal so that R_1.6_FT would mean the maximum reflectance values of band 11:

“The reflectanees of TM4 and TM5 at full turgor were used for TM4_FT and TM5_FT, then TM4 and TM5 measured on the other days were used to calculate LWCI.”
(Article, page 431)

As I am by no means an expert in plant science, I am not sure how the equation is supposed to be used with Sentinel-2 and if multitemporal approach would be correct.

If it helps, the normalized difference infrared index has (according to this article, page 45) a good correlation with canopy water content and it works: